Our last days in the Caribbean 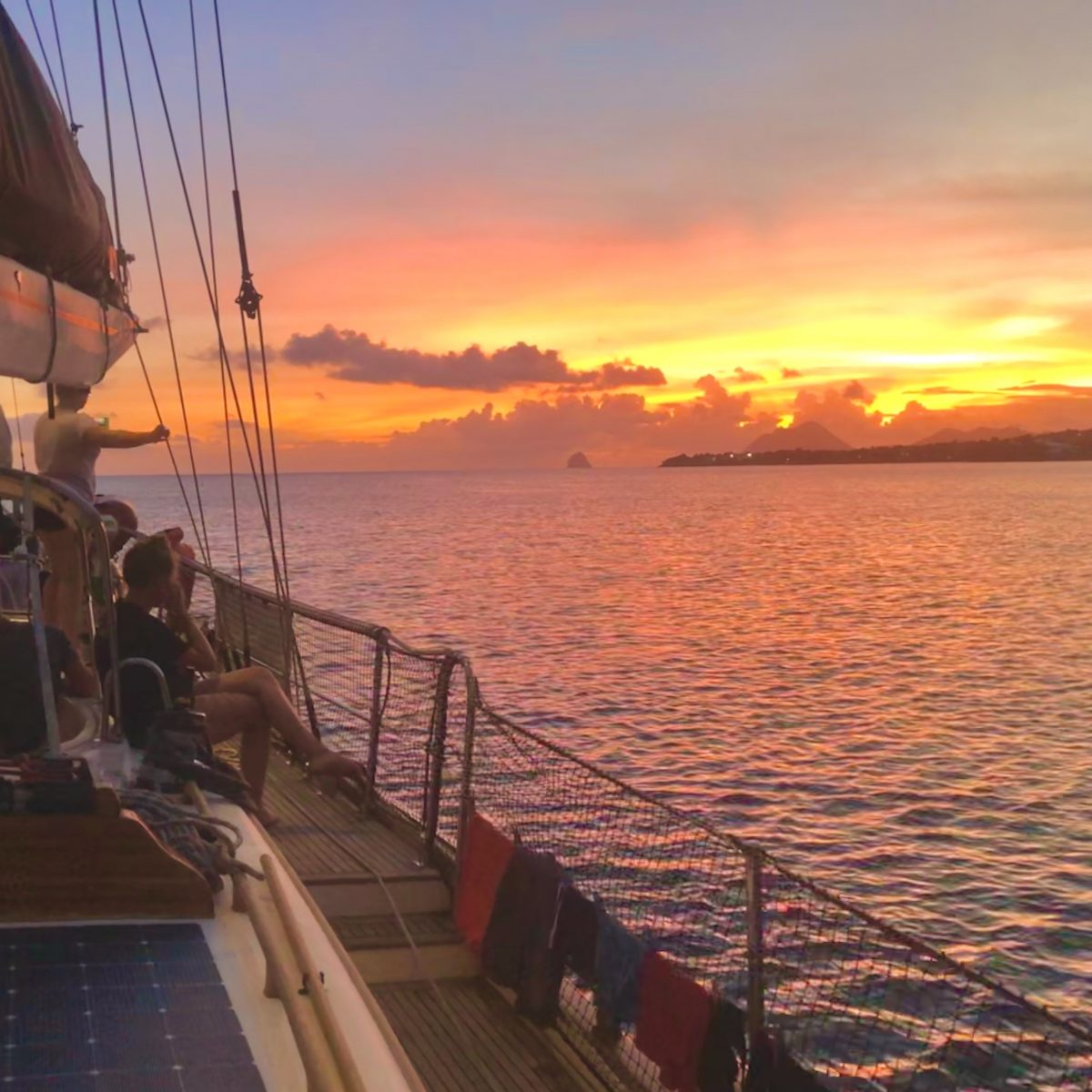 After the few late nights watching the America’s Cup ( totally worth it with New Zealand winning!! Yay 🙂 We stay a few more days around Le Marin and have quite a few adventures. Most of the group went for a little hike along the coast together with the crew from the Turtle. The walk went along beaches and between mangroves and we ended up at a spot with a huge beautiful swing standing in the water. A perfect place for a picnic before walking back. However, once back by the dinghy, one of the teens discovers that he lost his phone… So he had to do the walk all over but this time slowly and watching carefully. There was no luck in finding the phone… Meanwhile, onboard Guppy, we tried to localise the phone and saw it on the move, it had been found… I sent a couple of messages to his phone explaining the situation and asking the finder to call my number. It’s somewhat of a miracle but they actually did! Of course, they didn’t speak a word of English, so I had to dig deep in my rusty French… We had already seen that they had driven home with the phone which was pretty much on the other side of the island. There wasn’t a possibility for them to drop it off to us anytime soon but they would leave it in their letterbox with a key on top for us to pick it up. Since it’s not exactly around the corner and public transport is challenging here, to say the least… Sander and I decide to go together and see if we have any luck hitchhiking the parts that we couldn’t take buses. It kind of felt like we were on some strange treasure hunt traveling all across the island to retrieve one of the kids phone. It took half a day before we were back on board, but successfully! Meanwhile, the Turtle crew had come over with something they called a ‘’hooker’’ No it’s not what you think 😉 But we did really have to laugh at it. They have a 12V compressor with two diving regulators, mostly just to be able to scrub the boat without having to go up for air every half a minute, but the kids now used it to go treasure hunting underneath Guppy. Initially, they tried to find a piece of galley equipment that they had accidentally dropped overboard the previous day… Sadly that was unsuccessful but they did find an entire handbag with sunglasses, a wallet, and some coins that have gone completely black from the seawater. Looking at the expired cards it must have been underwater for at least six years already! After the kids had come back on board from the treasure hunt and had showered, we get Guppy ready to sail. We hoist anchor and sail to the next bay just a couple of hours north where we drop anchor near Anse D’Arlets. A really stunning bay with crystal clear water and good snorkeling. For a day now one of the girls has been having serious stomach pain and it’s been seeming to get worse. Our consulting doctor advises us to go and see a local doctor. So we do and she sent us to a lab close to where we just sail from to get some more tests done… It doesn’t seem very clear what is causing her stomach pain and the next day we spend living with her through her pain and trying to find out with local doctors, and eventually the hospital in Fort de France what it could be and how serious it is. In the hospital we find out it’s nothing serious but nonetheless very painful, she gets medication and we decide to stay in Fort de France until we can see if it’s going to work the way it should. Of course, meanwhile, the rest of the group has been spending some more time onboard as some of the shore activities had been replaced with doctor’s visits – but now they had plenty of time to work ahead on their schoolwork, which is never a bad thing. So it’s been a bit of a hectic week, but in these tougher times, I see the group just becomes even tighter and stronger as they learn how to deal with each other when things are not all well. In the meantime, it’s also amazing to see with how little guidance they can take over most of the runnings onboard and take care of each other. After two days in Fort the France, we decide to rent cars again and take the group to a beautiful waterfall. Which is a really cool walk through an amazing rainforest while climbing along the river boulders to reach this amazing site. We went for a nice swim in the refreshing clear water and watch big banana leaves rustle in the wind that comes from the enormous amount of water pounding in the pool below. After this nice day, we drive back to Guppy with a bit of detour heading up and around the big green mountains in the north and back along the coastline while the sunset casts beautiful colours all around us and on Guppy as we take the dinghy back to her.