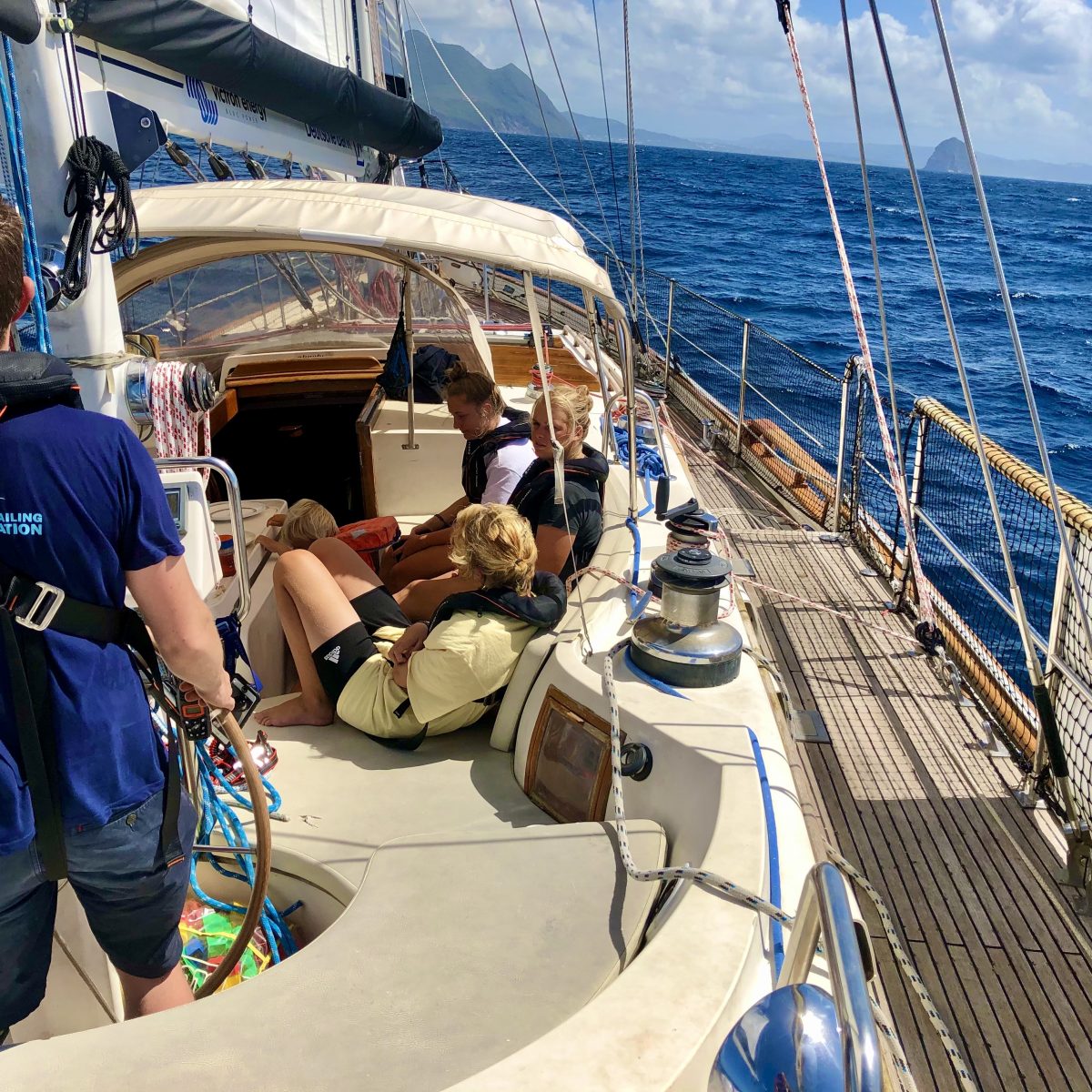 We enjoy St.Maarten for another couple of days in which we sail the Minicat and get invited over to the Green Dragon for dinner. The Green Dragon is now anchored in the lagoon and the crew of the Green Dragon shows our group how to work the canting keel, grinders, and winches. For a while, they leave the canting keel to one side to create a nice swing with a halyard from the top of the mast swinging out from the boat. Of course, everyone wants to try it. Meanwhile, I viciously try to find out which countries are open and to which awesome places we can still take our young crew.  Actually, only a few countries are completely closed, most are open but have long quarantine times which I would like to avoid. So instead of continuing north, I decide to point Guppy’s bow south again, back to Martinique where we have gotten permission to come in. We had so far pretty much only seen the village, grocery shop, and some of the surroundings of Le Marin. But even in that short time the crew had fallen in love with this Island so they were quite excited when I told them we would be going back. Of course for the new crew, it will be a new journey altogether. And it’s a nice one, sailing past many beautiful islands with a lovely breeze from the side. Well it should be from the side, we actually sailed close-hauled the entire time but the waves are friendly and so Guppy is able to sail higher while still making a good speed. Everyone settles into the sailing routine quickly and the watches are spent talking and looking at the stars. I really like that at this stage of the journey we are often able to see both the southern cross and the polar star at the same time. Besides many other constellations of course. The last few hours to Le Marin are upwind so we need to tack. Great exercise for everyone to learn the ropes and they enjoy having to work together. With a tack, little Tim who really likes pushing buttons… generally furls in the Hydraulic operated Genua to get it past the inner staysail easily. Then the running backstay needs to be put on at one side and released on the other side. Once we have tacked the genua can be furled out on the other side again. We sail into the same bay and anchor next to the Turtle again, they haven’t moved much since we saw them last 😉 Of course, everyone is very excited to see each other again, but we’re also tired so we make it an early night. The following morning starts with rain, something we haven’t seen much in the last weeks. It’s actually quite cosy to have the rain ticking on the deck and everyone settles into a relaxed weekend mode. Reading a book, playing a game, and the fanatic sailors under us settle onto the couch to catch up with the America’s Cup races. In the end, we are actually watching it all together explaining to those who don’t know what is happening. Teams are made with half cheering on New Zealand (yes me the loudest!) And the other half Italy, only to annoy me and Sander or because they want the next America’s Cup to be in Italy as it’s closer to their home. Anyway, GO NEW ZEALAND!

Once the rain stops and our usual sunny warm weather comes back we spend the rest of the day swimming and snorkeling at the reefs around us which are full of colorful and curious fish.