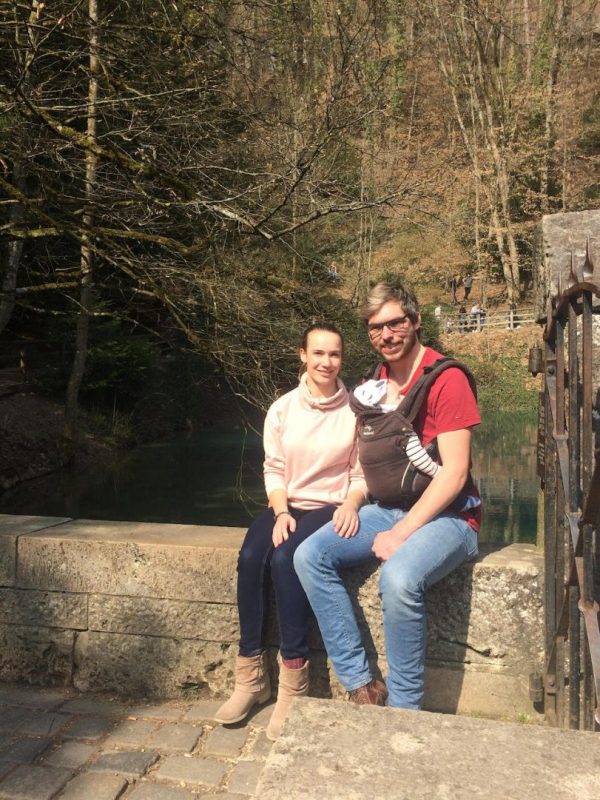 A new chapter in my life :) 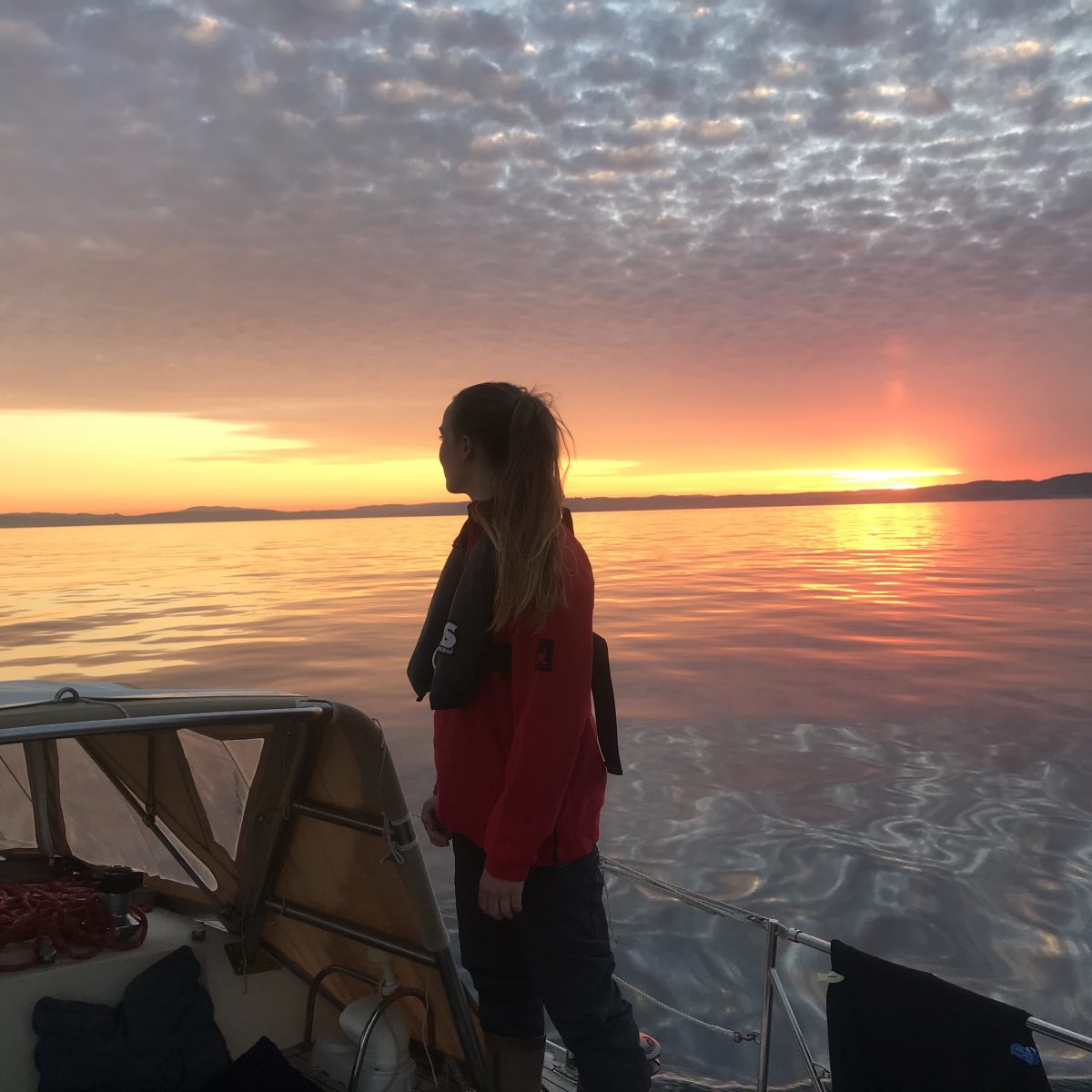 This last year has been crazy, so much has happened yet in some ways I felt like I was standing still and not getting anywhere. I always wish things would go faster and it’s hard when they don’t.
Of course the immensity of this project is so much bigger then when I sailed around the world that I simply can’t rely only on my own resources and even if I work day and night things won’t move as quickly as they did then or I wish they would. But I do also forget sometimes that it did take me a lot of years to prepare for my journey around the world however in a much more unconscious way. Also the disappearance of Guppy and the whole tragedy surrounding it does take up some of my headspace even if I try to focus just on the project, poor Guppy keeps popping up in my head.

There has been many great supporters ranging from small to big and all together we’ve gathered up about 10% of the finances which is a lot yet too little to start building and I had really hoped we could start building this year. We need about 40% to start the build of the ship. Thinking about it realistically it’s actually good progress and I do also know as with everything that the start of anything is the hardest. To take the first steps to actually get a grip on something and let the seed grow. It will get there, maybe a little slower than I wanted but it will, maybe with your help 😉

Last month we got the opportunity to sail a boat over and also another delivery next month, since things were going a little slow and since I was starting to get grumpy with life on land anyway it seemed like a really good opportunity to drag in some more money for the project and fill up on my vitamin Sea. At the end of March we headed over to Mediterranean sea where we found the 48ft sloop that I needed to sail out of the Mediterranean. She was standing on the yard and after a quick inspection we launched her straight away. She stayed afloat so that was a good start 😉 Two days later we set sail, after getting water, food, gas and doing some repairs like taking care of a serious gas leak! After we had the sails up and the boat was gliding along nicely I wanted to turn on the autopilot. I pushed some buttons, nothing happened, some more buttons but still nothing happened.. – it took us a good while to figure out how to turn the autopilot on as everything on the boat is written in Italian! After the first day where we needed to do a lot of figuring out how things worked onboard and fix things that were falling apart we actually sailed along very nicely.
Doing a steady 8knots although sometimes when the waves came from behind the autopilot wouldn’t manage and we’d have to hand steer. We hand steered through an evening and night on about the 4th day, while the waves were building up from behind and 30knots of wind. There wasn’t a single star in the sky and the horizon had been swallowed up in the darkness. Of course we couldn’t find the switch for the compass light either so we had absolutely no reference as to where we were going except the little wind vane on the top of the mast. Very tough steering while being blinded by masses of water rushing over the boat! We were wet and cold but Tim didn’t care, he was warm and cosy down below in his bed being rocked to sleep by the moving of the boat. During the day he had some birds to keep him entertained. For a few days we had little birds coming and going, flying through the whole boat and sleeping inside overnight. Eventually the smallest bird died and we were all very sad, the bigger two left when the winds turned more favourable to fly back to shore. We remained having lots of wind mostly on the nose, the big Genua on the boat was perfect for downwind sailing but useless upwind in anything more than 15knots which we had most of the time. So we ended up motoring a fair bit, flying and crashing over the waves. Discovering many leaks on the boat! This is not the first time I realised how spoiled I had been with Guppy. She may have been simple in some peoples eyes, but all the important things were there and more importantly working perfectly and having many back-ups. I really missed a good wind vane on this trip, water tanks that don’t leak, automatic bilge pumps, radar! Ooh I missed a good radar! And the active radar reflector and the SSB radio and and… Ooh well, nevertheless I really did enjoy being back on the water having a very happy grin on my face as salt water rushed over deck and waves jumped right on top of me. It felt so good to be out again. I was also very curious how it would be to sail with a baby, my parents had good advice in this as they’ve been through it all before with me 🙂 The great thing about little kids is that they are happy when they are with their parents, it doesn’t actually matter where that is, Tim always seems happiest if Sander and I are together, no matter whether we’re sailing, driving or doing groceries 😉 The boat even seemed to be one of his most favourite places because it is constantly moving. He went to sleep very easily and played with toys during the day ( that were also constantly running away or attacking him and he thought that was very funny)

In Malaga we made a very short stopover. From then on the trip was more gentle, we only needed to bash into the waves for a day and sailed downwind for the rest of time. This sailing trip was a really good test for Sander and Me. Two stubborn solo sailors sailing together! It was a bit of getting used to in the beginning and I needed to learn that I could trust him with the boat as well ( until now I had never been able to trust anyone while I was responsible, except my dad) Whenever I heard something change in my sleep I would race outside to save what I could, to then only find out Sander was actually doing what I would have probably done in the same situation. So then I stood in the companionway a bit ashamed after yelling at him and somewhat perplexed that everything was going perfectly. After a few nights I was even able to really get to sleep and not worry. Another thing that made me very happy is that Sander is just as serious about safety onboard and always being tethered on as me. I could go to sleep knowing he would click in his lifeline – I have had a lot of fights with people onboard about this, when I’m responsible they need to do it, but still if I knew someone didn’t take it serious I was simply unable to sleep because I would constantly be listening if I still heard signs of them being onboard and when I didn’t I would go outside to check. Tim spend some time outside but never came outside of the cockpit. We would often put him in his maxi cosy outside, hanging it under the dodger like a swing. He really loved that, the wilder it got the better he liked it 🙂
He really seemed to enjoy the sailing, trying to hold onto and chew on all of the ropes that would come into reach, things happening all the time and mum and dad close by. He’s got about 3500nm on his name already and only a few weeks before the next Ocean crossing! That’s actually more than I had at that age.. Yes I know it doesn’t guarantee he will be a sailor 😉 He doesn’t need to be either, I just really wish he will have his own goals and that I can teach and help him to make them come true. I believe the most important thing is listening to and being there for your child.

He’s been a little grumpy since we arrived, things stopped moving and he doesn’t understand why everything just stays in once place. But he won’t have to wait long or get used to it because soon we will be leaving from the Caribbean for another delivery 😀 And meanwhile I will keep going full speed ahead with my project trying to get the financing together so we can start building as quickly as possible! Of course all the financial help we can get is hugely appreciated, and a lot of little amounts can complete a huge project as well 🙂 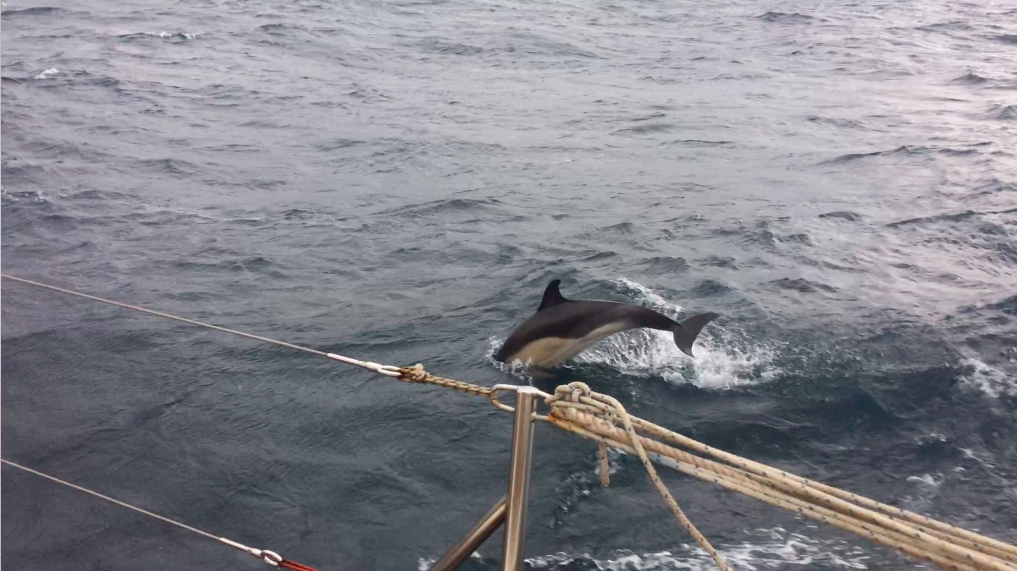 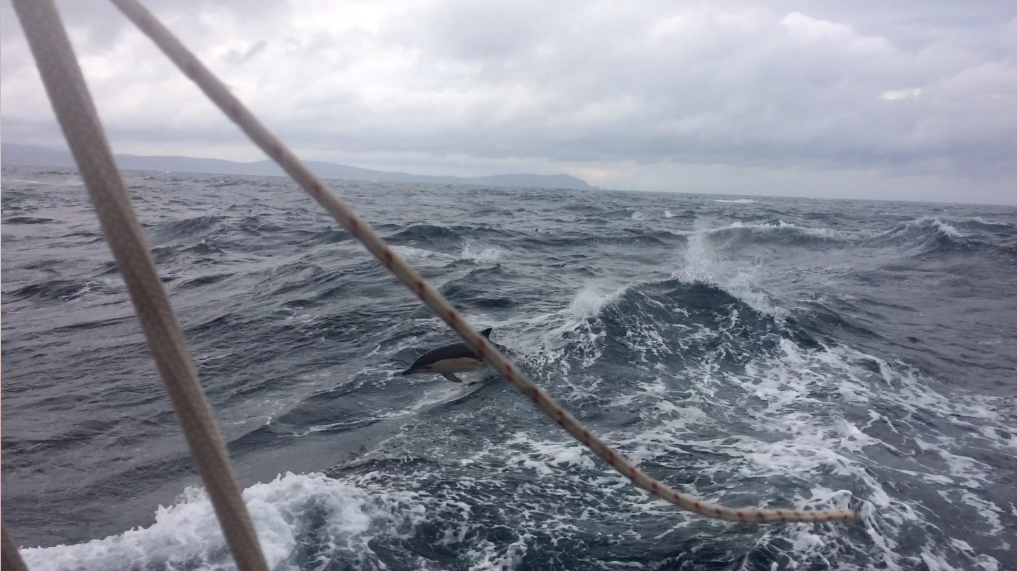 I always love watching dolphins play in the waves 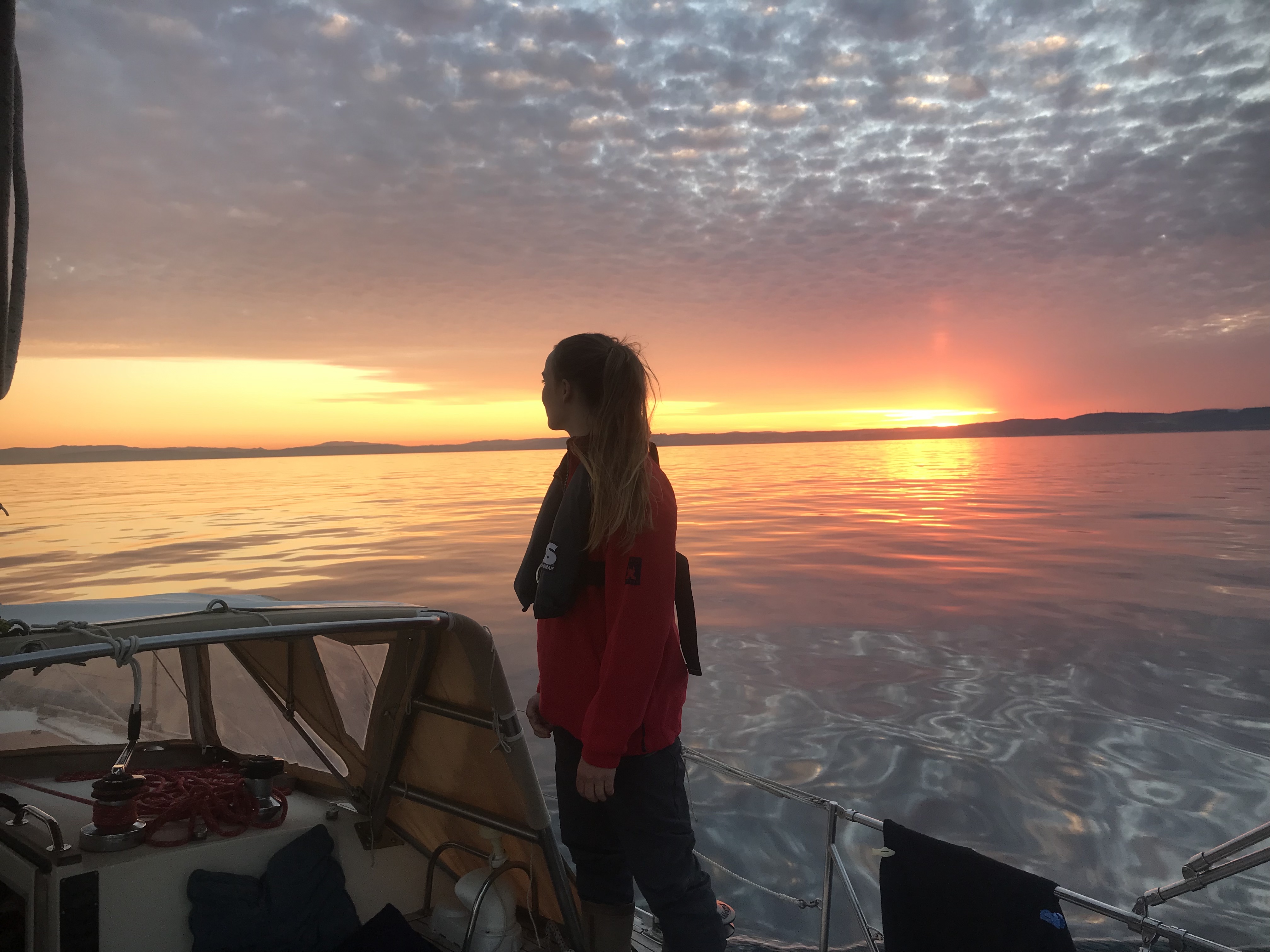 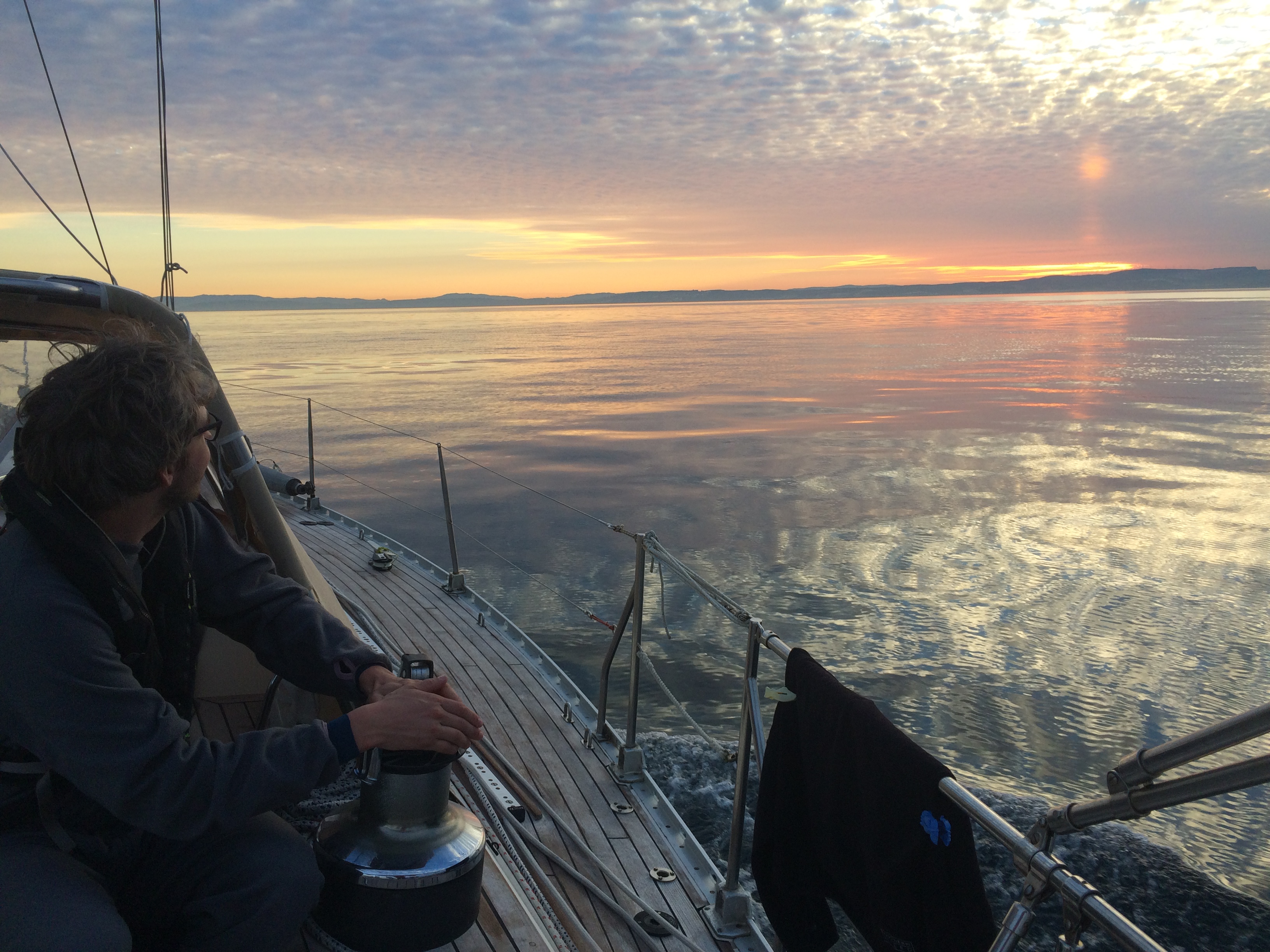 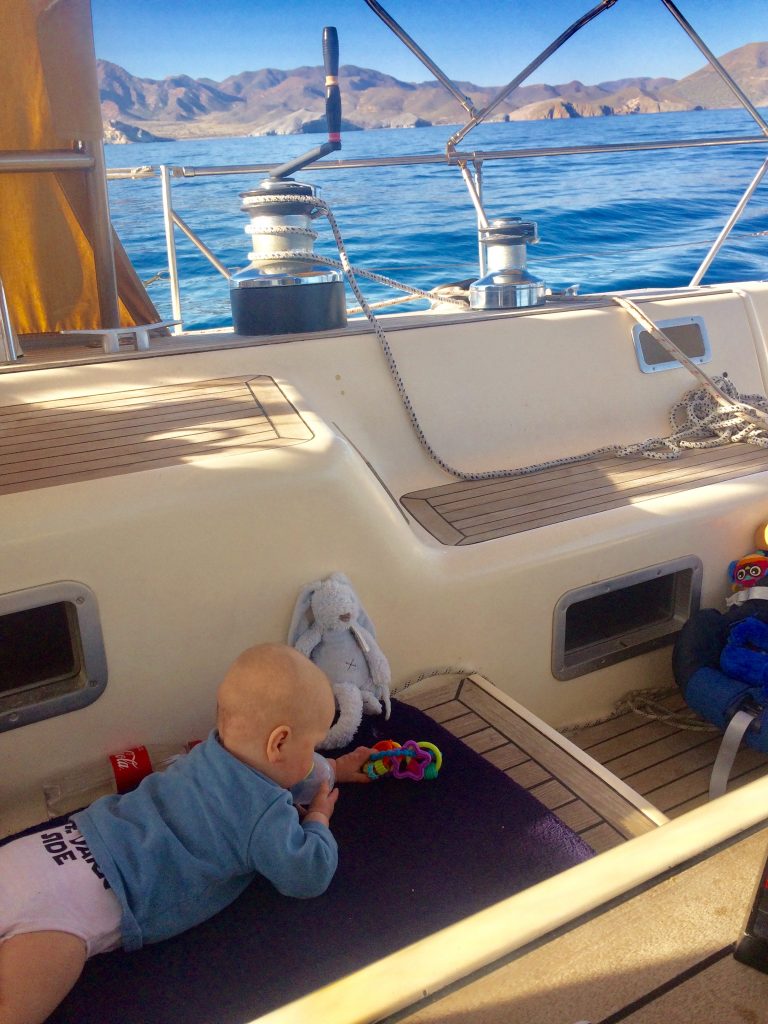 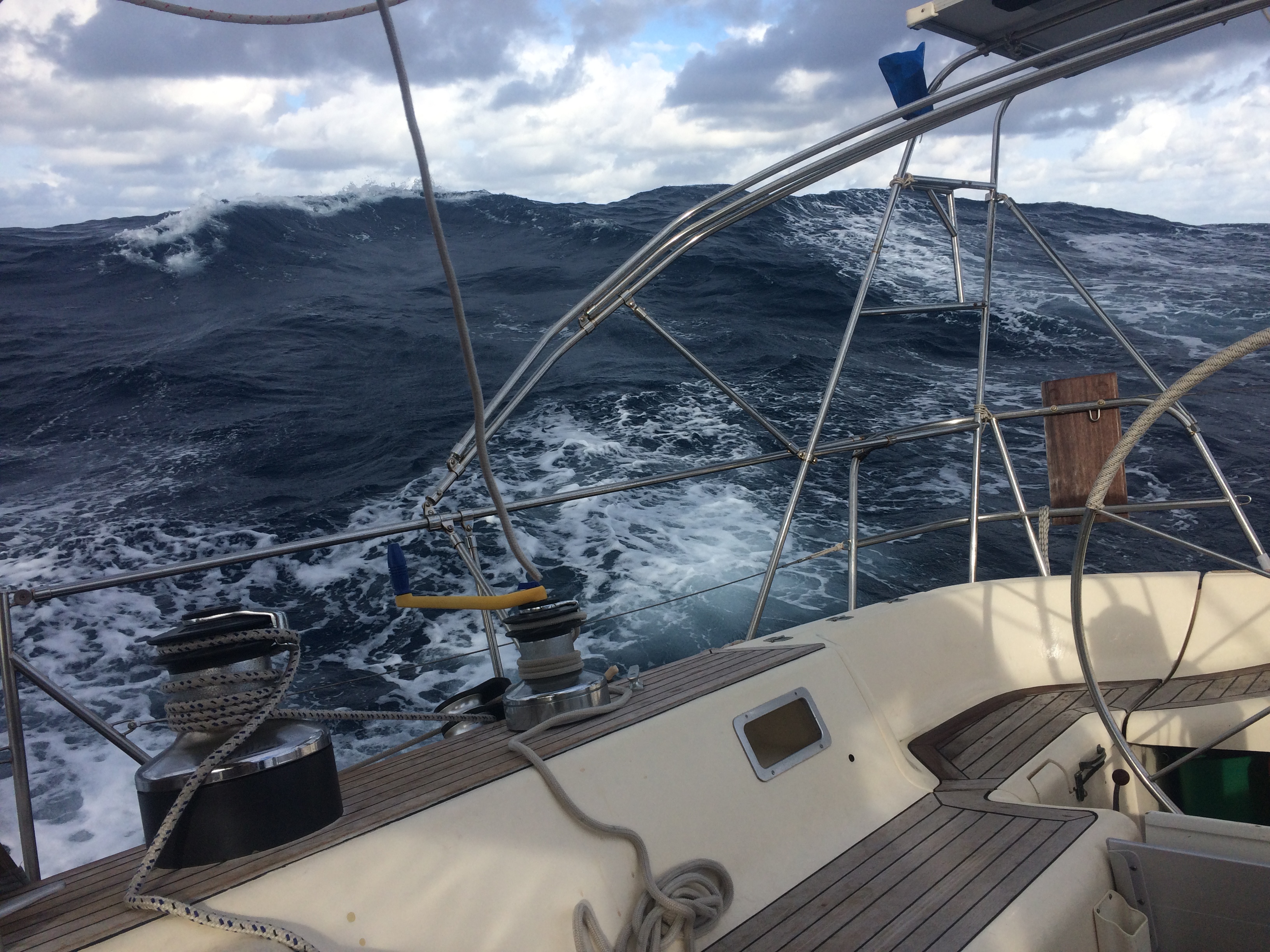 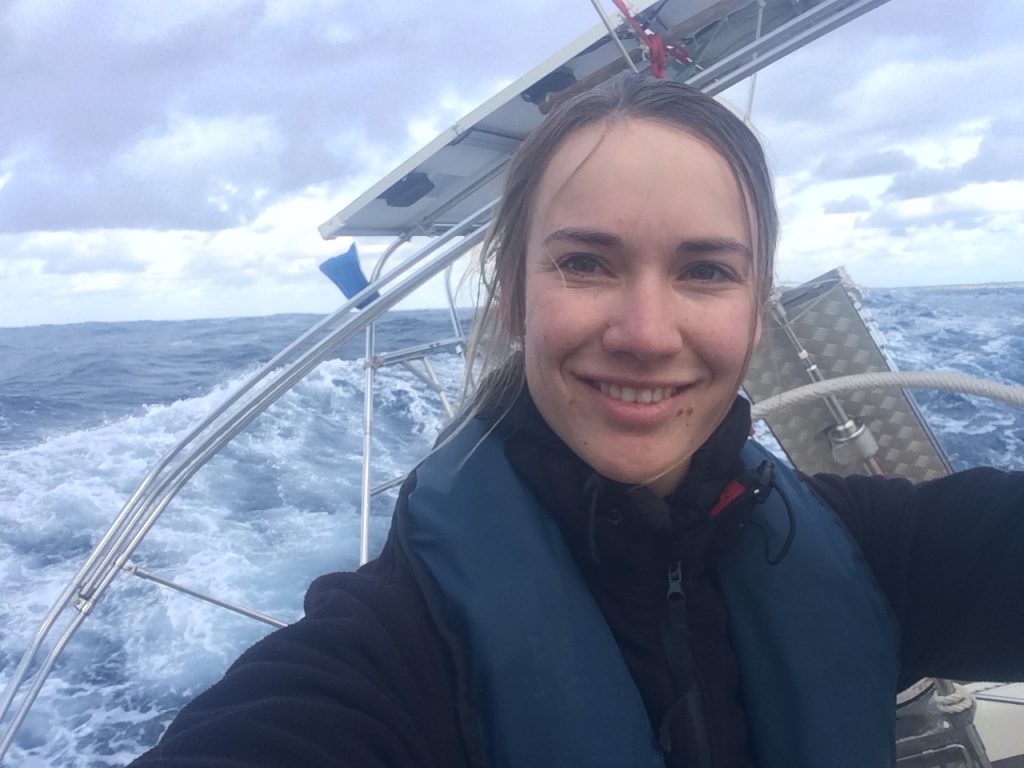 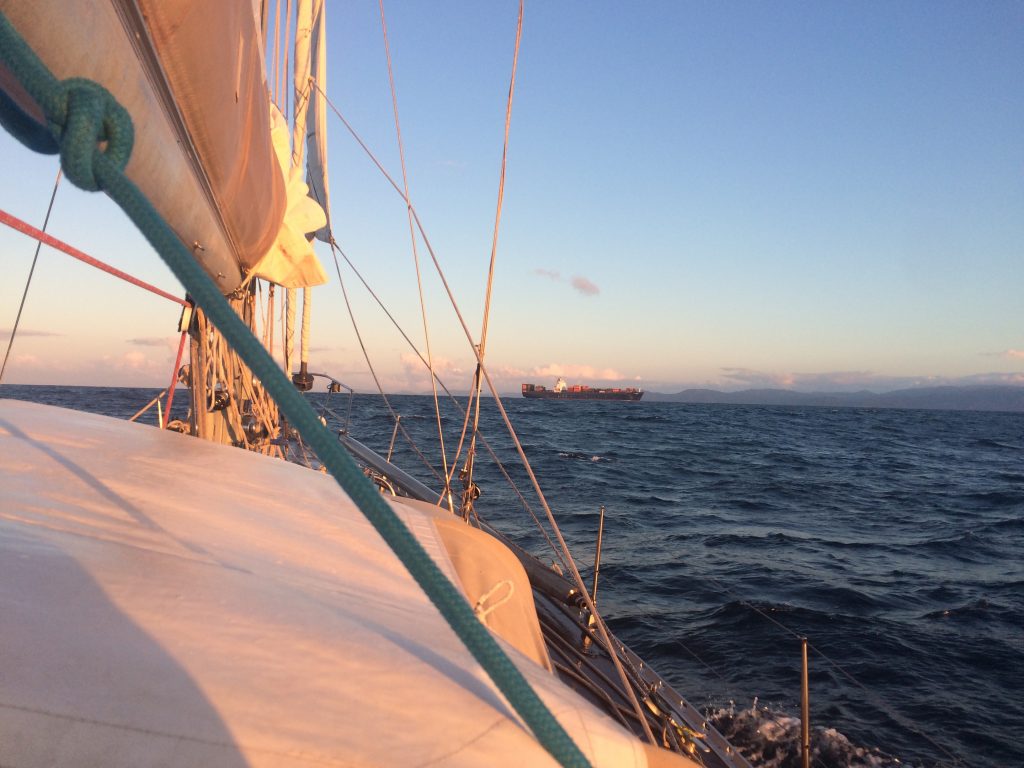 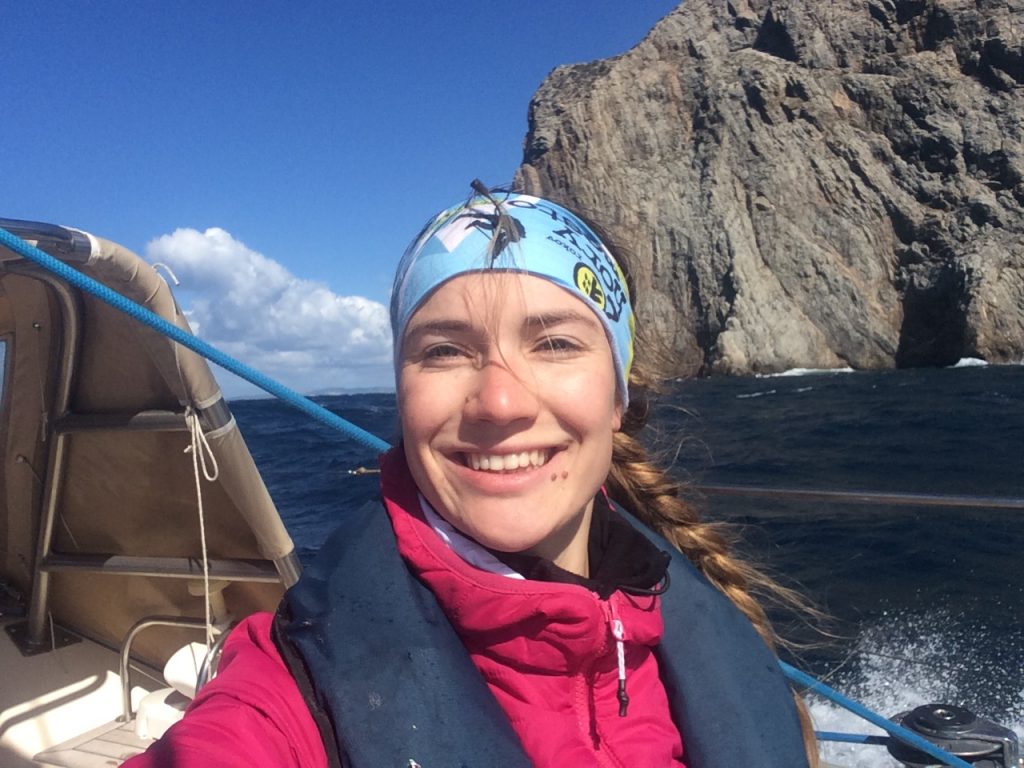 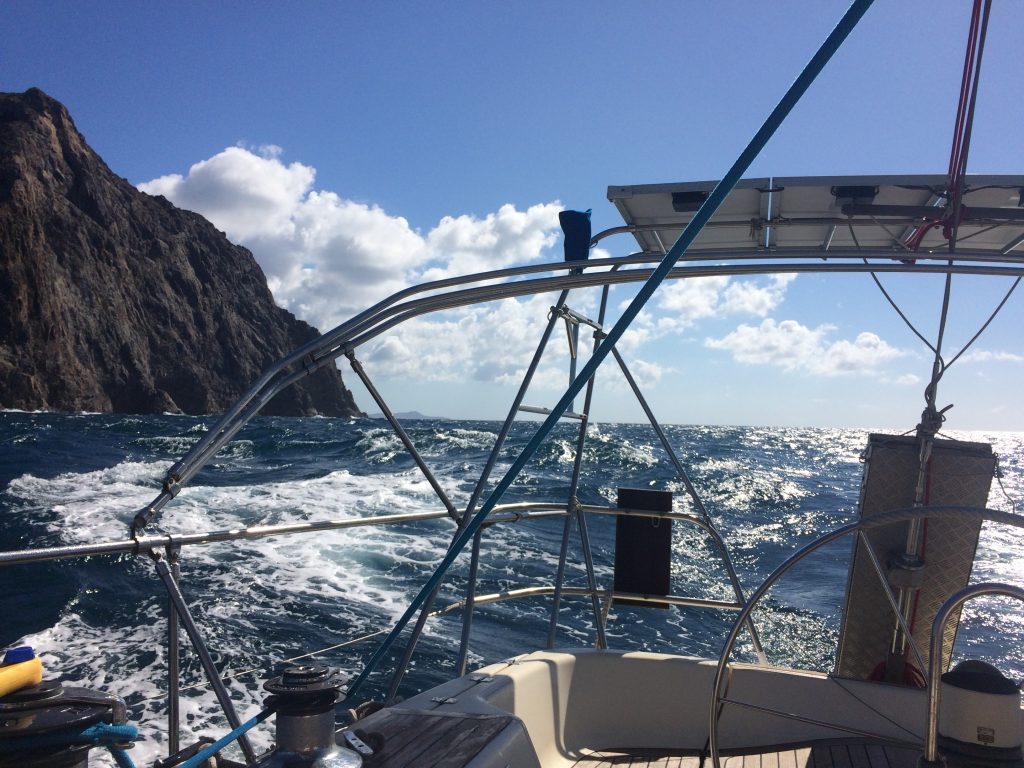 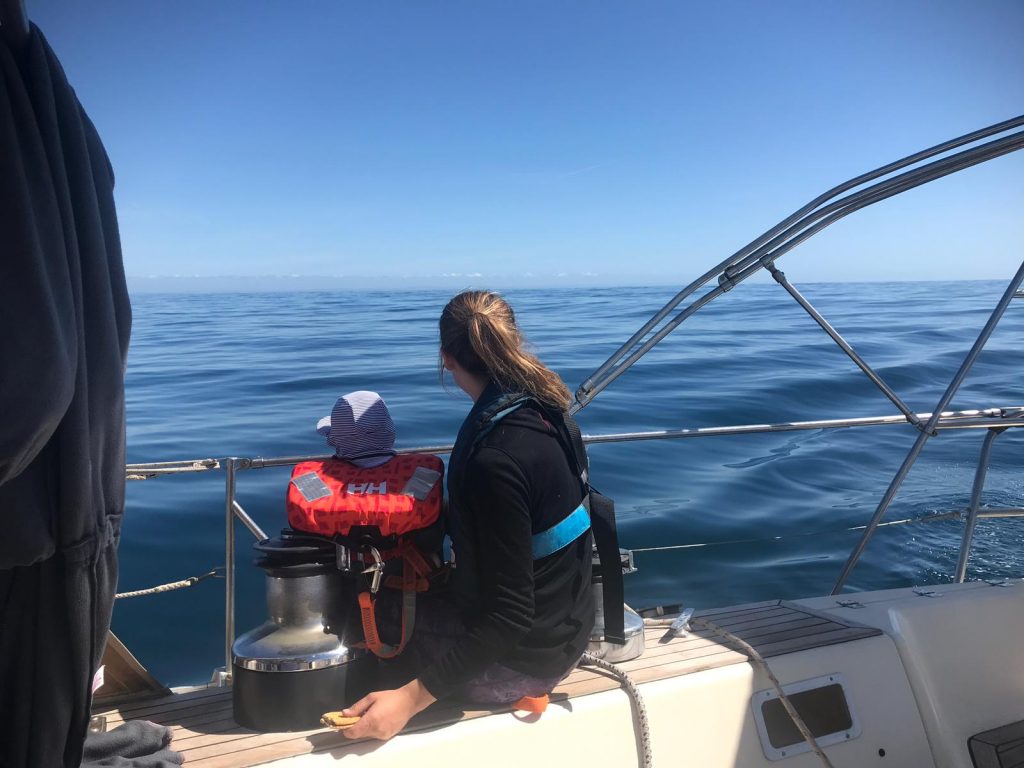 Watching dolphins play around the boat in a calm. 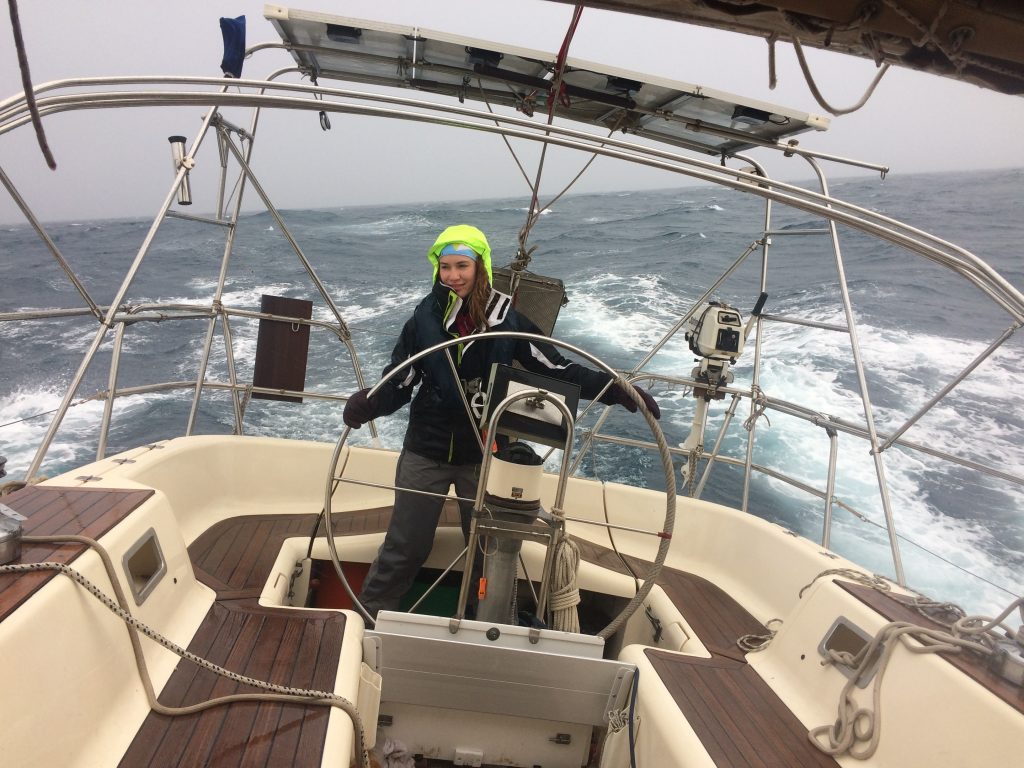