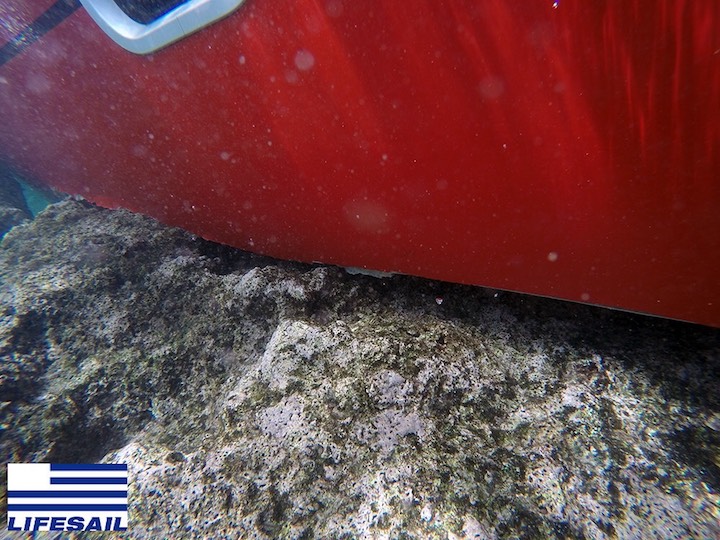 Based on information gathered from different sources.

She was first thrown on the reef during a squall in the night which is very common throughout the whole pacific.
The place of initial stranding was between rocks with big surge.
She was being bounced up and down for a few days before being thrown further onto the reef during another squall.
During rescue attempts the yacht moved resulting in her bow being completely under water.

The following is a list of damage known so far:
– Broken skeg
– Rudder and rudder shaft bend – the shaft is 80mm massive steel – different and much stronger then the original Gin Fizz.
– several holes in the hull resulting in water damage to the following:

>Batteries, Electronics & wiring ( Guppy had very extensive and complex wiring this would need complete replacement due to salt water intrusion)
> Engines ( Both engines, their systems, props, shafts would need to be replaced completely )
> Interior ( Partly broken out because of rocks sticking trough hull, otherwise damaged by salt water which can never be washed out, the interior of this boat is part of the structural integrity and is now broken loose ( would need complete replacement)
> The deck is balsa sandwich construction which was in an excellent condition however with all this salt water intrusion it would rot away within two years – leading to a highly weakened and useless deck.

Since she’s on the ocean side of the reef there is constant movement and bouncing up and down this leads to a lot of structural damage that can’t be seen at first sight like:

> Besides the holes that are in the hull, big parts of the entire hull are delaminated.
> The entire rigging has suffered extreme forces it’s not made for, leading to delamination of chainplates under deck and metal fatigue of rigging, terminals & masts. – It’s absolutely amazing that the masts are still standing! ( all parts would need complete sonar analysing to tell what could possibly be reused)
> Keel and keel construction, ribs are broken, delamination around keel structure.

Then there is also of course a very extensive list of small parts damage.

Here is rough overview of the minimal costs in Euro’s to repair Guppy:

This is exclusive of salvaging costs, shipping, environmental costs ( already going on) It shows clearly that Guppy is a total loss already and not worth fixing – especially considering the fact that she will never be as safe as she ones was and LifeSails intention is to sail with kids. LifeSail should have Guppy insured according to our agreement, however the insurance probably won’t pay out more then the market value – which is around €70.000. In this particular case I don’t know how the insurance will handle the situation since Guppy was anchored purposely on a very dangerous spot.

LifeSail is still under the impression that they can salvage Guppy, but after making this damage report and cost involved it’s clear to me that this is not an option. With a heavy heart and many tears in my eyes I’ve come to theconclusionthat the best thing to do is get her of the reef as soon as possible to limit more damage to the coral and environment and then scrap the boat.